What Would the Wee Man Do?

When I found out Edinburgh schools go back on the 10th of January, I was tempted to call the council.

What on earth was I going to do with them? When would I ever get back to work? 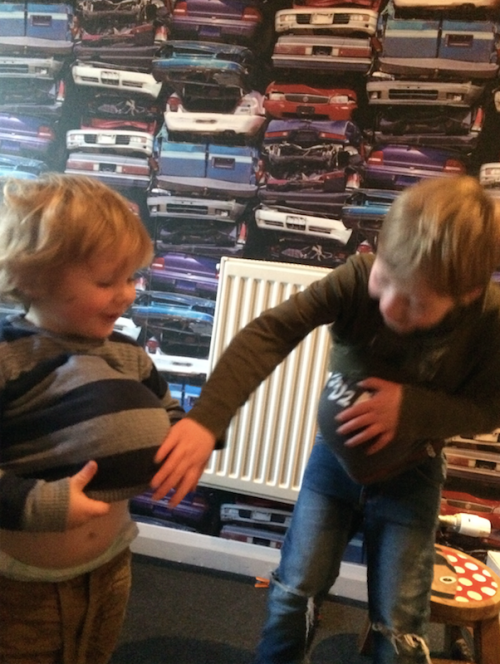 When in doubt – balloons

Rod probably wouldn’t admit it, but he must have been glad to get back to work on the 3rd. No one pulling anyone’s hair, repeating his name over and over and over or undoing everything he did… Actually, he works in the car trade, maybe that’s exactly what he went back to.

Thank God the nursery reopened on the 4th – only the Wee Man to entertain for three out of the six extra days.

Two days in and I’m kind of astonished to realise I’ve loved it.

What? So we’re at the park again – what’s your point?

If anyone is struggling to stick to their “Healthy January” resolution, may I suggest hanging out with my son? He makes every minute of the day count – and I love that about him. Some of my friends’ kids are content to watch movies, play with their Christmas presents and generally hang out at home. Not him.

Yesterday, after dropping KD at nursery, we went straight to soft play. We were the first ones there and he whooped with delight. One other family arrived, with two small kids, one of whom introduced herself to the Wee Man and off they went. She was adorable. I played football with them and cheered them coming down the slides. They got on so well that her mum and I swapped numbers and arranged a playdate.

After a couple of hours at home we were off again, to visit Auntie Kaka and play with all her daughter’s toys. Then it was the big one: his first swimming lesson. That half hour in the pool made me so proud I could burst. For once his general lack of fear played in his favour – he was leaping into the water, swimming valiantly as he sank lower and lower and laughing the whole time. I think his instructor fell in love with him a wee bit – I could see she was proud too.

Today we went back to the pool after the nursery drop off and practised. To say he was delighted was an understatement, I actually feel bad for keeping his arm bands on this long. There was an aqua aerobics class going on at the same time and he kept trying to join in, dancing even as he drowned a little bit. There’s a soft play at the gym so I managed a quick coffee as he played, but soon we were off again, home for lunch and a wee bit of telly before donning full waterproofs and heading to the park. 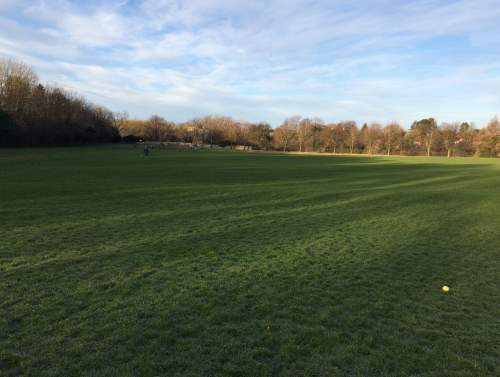 A dot in the distance

As he shot off across the field with his football in the sunshine I thought “He’s just a free spirit,” somewhat indulgently. With no KD to slow us down we must have covered the length and breadth of that huge field several times over. He only stopped to hang over the fence and chat to the woman poo-picking in the horses’ field. She’d heard the rumour JK Rowling owned the sprawling stables across the bypass too and we commiserated in our jealousy.

After an hour in the zero degree cold we headed back to the car and popped in to see his great pal and her brother who, in his mother’s words, is “mad on the Wee Man” (rather than mad with him)… His energy was undented. They tore around the house, laughing their heads off, as Allison and I drank tea and discussed whether boys or girls were more of a challenge to parent.

“You be Anna and I’ll be Elsa”

In the end the only thing that stopped us was a clamp on the wheel. Yes, they may be saving paper by doing away with tax discs, but they have opened up a whole new cash generator. I had just loaded KD into the car seat and was going back for the Wee Man when I realised the junk mail on the windscreen was in fact a £100 fine.

Drinking through the pain…

We have a joke in our family. Whenever we’re stressing about something we think of Big B, my so-laid-back-he’s-horizontal brother in law, and say “What Would Brian Do?” I’m thinking of adapting it to “What Would the Wee Man Do”? He is joy personified. It’s exhausting, but when it’s all about him, it’s incredibly uplifting. And fat burning.

So whenever you’re fed up, go ahead and borrow my new catchphrase. At least it will get you through January.

Through rain, snow and Hurricane Bawbag I have been in the park for my twice-weekly Buggy Bootcamp sessions.

For the last six weeks I have followed a strict diet plan. No takeaways, no cakes, no booze, low carbs. Mostly. In the interests of full disclosure I have to admit to a few lapses:

•one drunken night – on gin & slim at least

*one Chinese carryout – there was b*gger all in the house and it was 8.30pm

*two slices of banoffi pie – (two different days) at my mother-in-law’s, a woman you cannot refuse!

Our final session was on a sunshiney day, which made a nice change. Wendy was on a mission though – the hill runs were back in the routine, only this time we had to do FOUR instead of three and straight into press-ups in between, no breaks. A quick drink and we were off again, jogging to the next station for lunges, squats and – you’re kidding right – another hill run? But we had to continue up all the steps at the top? Twice? That’s that Lindt bunny taken care of, no probs.

I thought I’d feel triumph and relief and all sorts when we finished our last stretches – but actually I felt like I’d just started something. I’m going to keep going to Buggyfit twice a week. I feel amazing. I’m sleeping better. I’m worrying less. I’m full of energy and I feel good about myself. I knew before the weigh-in that I’ve reaped the benefits, so I wasn’t too hung up on the final figures. But I was very pleasantly surprised…

I have lost seven pounds!

I have lost three inches from my waist and an inch from each upper arm. My legs have stayed the same.

So thank you Wendy for coming up with a cunning plan to keep us all dedicated through the horrendous weather. I’ve really enjoyed it. In fact, I did my own little Buggyfit session in the park this morning. Here’s to a fitter 2012! 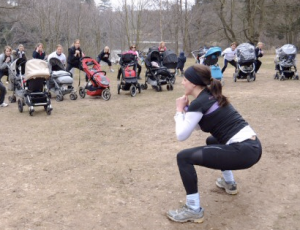 Borrowed from http://www.buggyfit.co.uk, check it out to find a local group

When I first wrote about Buggyfit I joked it was like Buggy Bootcamp. Well, either the instructor read my blog or I’m psychic because now it actually is.

I have signed up to the pre-Christmas, 6-week, twice weekly Buggy Bootcamp which comes complete with nutrition plan and supplementary exercises. Today was session 3 of 12 and I am quite chuffed I’m not dead yet. Far from it, in fact.

I’ve been going once a week since July and I am no longer the sweaty, frizzy, red one at the back – I’m the perspiring, curly, pink one quite near the front. So I thought I should step it up and lose those last few pounds before I pile them all back on over the festive season.

We were all weighed at the start. I was quite disappointed to see I was exactly the same weight as I was when I started Buggyfit four months ago, but as one of the other mums comforted me, we were fully clothed in winter gear. So that must count for a pound or two. The first session was three days after I returned from a ten day holiday in the Canaries so I expected it to be a bit of a kick in the proverbials. It was OK.

The second session, which I went to the following day, was a killer. Even the double-buggy mum overtaking me couldn’t shame me into running another step. Today I actually managed to do 20 press ups, 20 tricep dips, 20 shoulder pulls with the rubber band, run round the pond and then do it all over again – without collapsing! And that was after our hill runs and walking lunges…

As far as the nutrition plan is concerned, I’m pretty much following it. We were at a wedding at the weekend so I’ve written off two days but I’m back on it now. I had forgotten about the extra exercises until one of the mums reminded me today – so I’ll need to shoehorn some abdominal work, lunges and squats into my working mum’s diary somewhere.

My aim is to lose a pound a week. There. I’ve written it down so I have to stick to it. Six pounds in six weeks.