Isn’t it just the cutest when your toddler becomes a proper wee lad with views on the world and a proper best friend?

I feel like our wee Smoosh has grown up so much in the last few months. The things he comes out with just astonish me. He remembers everything, which frequently catches me out, and he repeats everything. Rod insists it was me who “taught” him the F word – but when he said it to Grammy, after she’d told him to stop playing with the gas hob, he added: “That’s what daddy says”…

Last night in the car on the way home from Glasgow I said: “Hey – no sleeping!” and his answer nearly made me crash.
“I’m not sleeping mummy – I’m just chilling.”

He’s such a sociable wee lad (he and his friend Lewis yell “Hi stinky bum” across the street at each other at the school drop off) but his very best friend has remained constant for a long time now. I’ll call him Spiderman because that’s who he thinks he is.

The woman in the supermarket asked me if they were twins.

Spiderman’s mummy is also a superhero, she saves me frequently, including when I crashed the car last week. It is so great to have a friend who will happily take your kids or give you hers, who also lives a few streets away and who shares your guilty passion for alcohol on a weeknight. She loans me her daughter too, when I want to play makeup or princesses.

I spend a lot of time discussing how hard being a mum is – but actually, friends like that make it wonderful. I’m lucky to have her and all the other awesome strong mums around me who get it – so I’m going to take a day off from the moaning.

I’ll be back tomorrow no doubt.

Unrolled rolls, motorway escapes and the joys of motherhood

I am at the stage in my life where I can’t leave keys in the door; tea on low tables or biros anywhere.

I have to leave the toilet seat up for the misfiring four-year-old, but down for the fishing one-year-old. I want one to sleep during the day and the other to stay wide awake till bedtime. I’m delighted when one uses his knife and fork properly but watch in dismay as the other tries to use cutlery.  It’s a relentless, trouble-shooting, fire-fighting business raising two small boys and the noise levels would never pass European laws.

At the weekend, the Wee Man, having surreptitiously listened to a conversation I had with a friend about his 20 month old calling the police to the actual door, dialled 999. I was oblivious, being busy with the dinner, and grumpily answered a ringing phone only to hear an efficient voice say: “This is the police control room, we’ve had an emergency call from this number, is everything alright?”. I was mortified. I quickly reassured her and confirmed our address – then grudgingly admired my son’s awareness. At least he knows the number 9 and what three of them do, I reassured my husband later that night.

As entertaining as my sons’ mischief is for my friends, it is a source of constant stress to a person like me who likes things to be tidy and quiet.

“You were exactly the same until you learned to read,” my mother loves to tell me. I doubt my naughtiness was ever as ingenious, but at least I have some hope for the future. KD at least seems to be channeling his inquisitive nature into engineering tasks, like taking toys apart and opening car doors on the motorway.

Usually though, just when I’m at the point of total despair, something happens to set me back on track. A glowing nursery report or a new word, perhaps. Or a conversation like I had today. The man in question was apologising for yawning – his 10 month old had kept him up most of the night. “She’s a bit of a golden child,” he admitted, before telling me a harrowing story of a longed-for pregnancy confirmed just hours before a miscarriage and emergency operation. They had the fallout of post-natal depression to deal with regardless, following the news they may never have children. And yet here they were, the adoring mum and dad of a teething daughter. This was in the back of my mind as I watched an episode of Call the Midwife, and empathised with a character struggling to come to terms with motherhood and the responsibility it brought.

I went straight onto my WhatsApp group of mummy friends, telling them all how wonderful they were.

“Hard work is what makes a mother,” one of the Call the Midwife characters said in the episode. “We like to think something magical happens at birth…but the real magic is keeping on when all you want to do is run.”

And the rewards are priceless.

5 things I love about my second child

The second child is always easier, they say. They have no choice.

It’s true poor KD has been left to his own devices a lot more than the wee man ever was. I only have two hands and 24 hours in each day. He’s always been a very chilled out baby, thank God, cos the wee man is the same whirlwind he’s always been.

In the last week, though, KD has suddenly steamed past several milestones, so I feel like I really have to dedicate a whole blog post to the little boy he’s becoming. So here are five things I love about KD:

Ever since the day he starting rolling – which was front and back within fifteen minutes and off he went – KD has been into everything. He had a wee wobbly up-on-all-fours test run for a few days, then tried putting a hand out – and suddenly he was crawling. Now there is no stopping him – or finding him, sometimes. I caught him escaping out the back door this week and grabbed him before he nosedived off the one step in our bungalow yesterday. His favourite destination is his brother’s room, where he empties all the toy boxes and chews on shoelaces.

2 He contents himself with anything.

He can find the fun in anything – a label on a blanket, an envelope on the carpet or a little flicky sign in Tesco. He amuses himself for ages and is the least demanding baby I’ve ever known. He’ll sit in his high chair just watching us with no toys on the table (because he’s thrown them on the floor) for ages. Admittedly his brother’s antics are very entertaining which leads me onto no.3

3 He adores his brother

His face splits into a huge grin whenever he spots the wee man – and the feeling is mutual. He’ll tolerate the kissing and cuddling and grabbing and general roughhousing – but he’s also very good at rolling on top of him and pinning him down. If KD is in the middle of his lunch and the wee man is behind him, he’ll lean backwards out of the high chair, craning to catch a glance. He reserves his belly laughs just for his brother, which the wee man adores, and which makes me all teary. His new trick is to try to copy him dancing in a shoogly wee side-to-side shimmy which totally cracks me up.

4 He has a sense of humour

He knows when he’s done something clever and takes great delight in getting my attention to appreciate his genius. Like the time he managed to roll into a rucksack and crawl towards me with it on his back. Or the day he figured out how to play peekaboo and lay with a muslin over his face giggling and waiting for me to pull it aside. I’m convinced he is an exceptionally smart child (as every mother is) which leads me onto point 5.

Perhaps it’s because the wee man was quite late to hit all his milestones that it seems like KD is miles ahead. He was eight months old when I realised he could stand against something for ages. He observed my delighted face with a nonchalant “yeah – and?” look on his face. He said mum and dad in the same breath and picked a very stressful, hungover day to demonstrate his new trick – making me the happiest woman in the world. He seems to understand a heck of a lot already – responding instantly to ‘clap your hands’ or ‘dance!’ – and reacts to words like ‘daddy’ even when he’s nowhere nearby. He loves other children and will go to anyone without a fuss.

In short, he’s a brilliant wee dude who makes us all very happy. I’ll try to give him more blog space from now on! 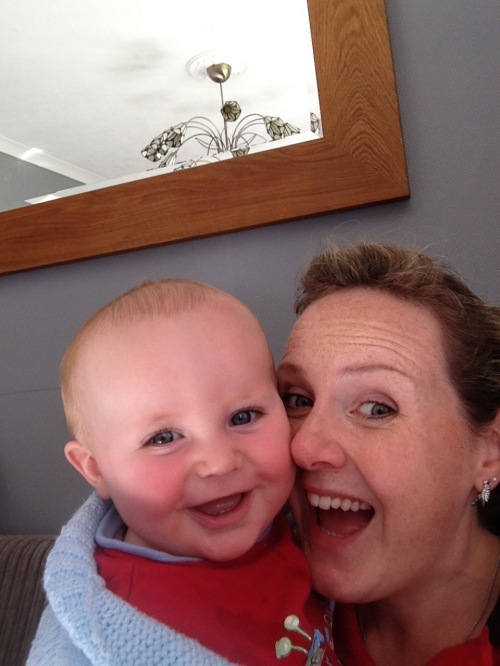 It feels like I’ve stepped through the looking glass again. Everything in my life is the same but different, altered by the arrival of our little KD.
My body, which appears recovered from the outside (I was discharged from the labour suite seven hours after giving birth) is still healing. It can only cope with one emotion at a time and I am rocked by the shifts. One minute all I can think about is how overpoweringly grateful I am, to God and the universe, for giving me a healthy baby boy. The next I am consumed with fury that the Wee Man should deliberately wet himself six times in one morning.
I feel exactly like I’m standing barefoot on the beach, each wave pulling more sand from under me, the sun and the thunder clouds fighting to decide what the weather should be.
I haven’t slept for longer than three hours for nearly three weeks now. The nights are foggy; KD looks for the boob every couple of hours, burps over my shoulder and sighs back to sleep, while I manoeuvre cushions and blankets and flop gratefully back onto my pillow.
And in those lucid hours after a daytime nap, when KD is still asleep in his bassinet and the Wee Man is at nursery, I look around my messy house, consider my air-dried hair and makeup-free face and think to myself: “Enjoy it, for this too shall pass.” 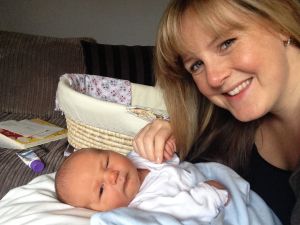