Once upon a morning… 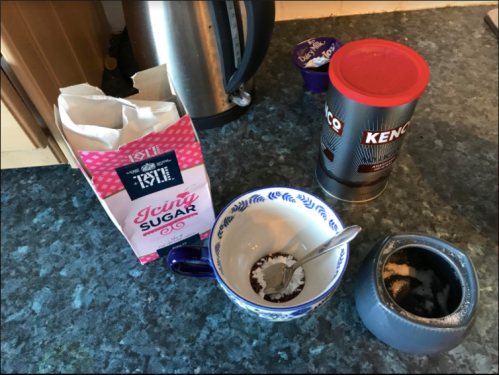 Putting icing sugar in my coffee was, in fact, the icing on the turdcake of my morning.

Picture yourself in bed, squashed.

You have a wriggling three year old on one side and a spreadeagled six year old on the other.

One rolls out and you gratefully unfold your limbs – then leap to attention as he starts emptying your jewellery box. For once, you’ve all slept beyond 5am – but it’s Wednesday and everyone needs to be out the door in 45 minutes.

There’s the usual nonsense of breakfast rejected, iPads demanded and juice spilled – punctuated by “No, I’m not getting dressed,” every five minutes.

You cobble together the lunchboxes, scrape your curls into a ponytail, split up fights in your underwear and then herd them into the bathroom to brush their teeth. The three year old is still in his pyjamas because, “NO, I’M NOT GETTING DRESSED,” is still on repeat.

“Fine, you can go to nursery like that,” you say. He stops, considers and then grins widely. What fun.

The six year old wants to cram 16 toy cars into his school bag and you spill them on the driveway as you shove everything into the car, including your older son. The three year old is wailing on the doorstep. It’s cold outside when you’re only wearing pyjamas. You throw all his clothes in a Tesco bag, go back for shoes, give a martyred smile to a passing mother with well-behaved, clothed children and strap the squirming toddler down. I mean in.

You arrive at nursery. He’s been very quiet and now whispers “Mummy, can I get dressed now?”

“Yes of course darling,” you cry brightly, wrestling with seatbelts and pyjama tops and jumpers. Your six year old, who’s jumped into the front seat to ‘drive’, decides to throw open the door just as a van drives past, resulting in screeching of breaks, honking of horns and a minor heart attack.

You leave the small one half naked on the pavement to rescue the big one, apologise to the driver, resist the urge to lose your shit and finally, finally, deposit the now-clothed but suddenly inconsolable child with the nursery teacher. “Mummy don’t goooooooooo,” he wails, as you remove the teacher’s mobile from the older one’s hands and usher him back to the car.

I mean f**k. The last time he did that he was three.

You rush home, change his trousers, grab a tenner to buy milk after drop off cos you’re going to need some serious coffee and push him through the door as the bell goes.

You bump into a dad in the corner shop.

“Did you know we had to pay for the school trip today?” he asks you.

You burst out laughing because of course you didn’t and he kindly offers to drop the £1.60 into reception for you. Then he texts you to say actually, they don’t accept cash, you must pay online, but there’s a £2 minimum spend, so actually you have to add credit to your account and f**k how do you even do that and what’s the three digit code for your credit card anyway and do you give consent and then – at last – it’s all done and you can have a coffee.