Usually it’s the Wee Man behaving like a chimpanzee in confined public places… but looks like all the bad press I’ve been giving him has resulted in a cabinet reshuffle. KD is now King of the Apes.

From 5.30 this morning he has been stamping around, making demands and throwing his weight about. I lost him three separate times in the playground for god’s sake.

My optimist trumped my pragmatist when one of the mums suggested coffee and cake at the local cafe – I should never have let him loose in the wild.

He helped himself to smoothies from the fridge, locked another child in the play area and sat on every seat at the table, pronouncing each one dissatisfactory.

When the waitress brought the cakes out for the display I had to dive Klinsman-style to stop his sticky little fingers digging straight in, then physically restrain him from swapping a chunk with his wee pal Willow for an Oreo. By throwing it at her.

The final straw was Innocent – yep, I sat down on the carton, spraying pink liquid all over my white trousers.

As the other mums tried valiantly to suppress their guffaws and supply tissues I pronounced I was leaving. KD, of course, took that as a cue to toddle happily into the play area and start making cups of tea at the play kitchen. I turned to say goodbye to my pals and he shot past me, out the door, into the street and off down the hill.

Me and my pink arse lumbered after him, holding him squirming and throwing a tenner at the poor waitress as he yelled “MY CAKE! MY NOT FINISHED!”.

I am now sitting in the parking lot for B&M stores, taking deep breaths while he snores in his car seat. A nap at 10.40. I don’t even care. We’re going to a special event at the zoo tonight from 6-9pm so he’d never last without it. They have a splendid chimp enclosure…. 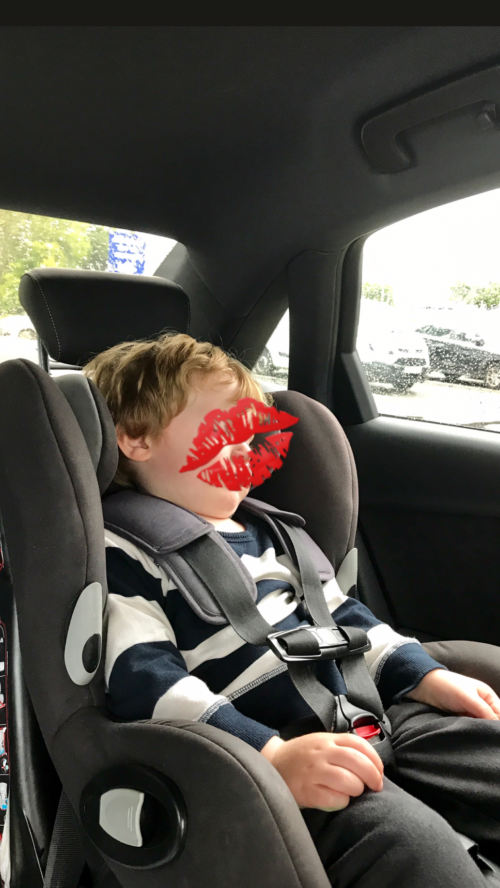