Summer cheated on me – it abruptly ended our brief love affair in a fortnight of gray skies and relentless rain.

At the same time, the wee man ended his love affair with breast milk. A few days of fussiness led to a day of complete rejection. I tried one more time and he bit me. My mother-in-law grabbed her own boobs in horror, I gasped like a landed trout and that was the end of that. To top it all off, he had a rare sleepless night and, as I was sharing a room with him at my parents’ house because Rod was in Aberdeen overnight, so did I.

As I trudged downstairs at 7am to make his bottle, I was grumpy as hell – and then I opened the curtains.

Glorious sunshine greeted me, beaming from fresh blue skies. Delighted, I packed him into the pram and headed for the park. It was like summer had to be properly washed away before autumn could assert itself. 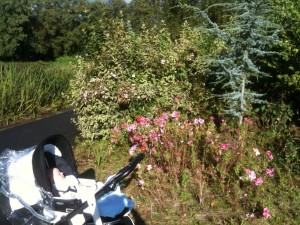 The trees are just beginning to turn, there are still colourful wildflowers hiding in amongst the foliage and the ducks seem optimistic. So I will take my cue from them.