First Aid for babies and toddlers

Unless your workplace offers it, it’s surprisingly difficult to organise First Aid training.

It’s something I’d always intended to do, but time flies in and suddenly you’re phoning an ambulance and fully aware of your ignorance.

The British Red Cross was my first Google, though I was also aware of St John’s ambulance. There was a centre near me, but it was going to cost £45. If I could get 15 people together and find a suitable venue I could bring that down to £25 each. So I did.

Luckily the Wee Man’s school was happy to host and other p1 parents were happy to come and so there we all were, grinning at having a child-free Saturday morning, and feeling rather smug to boot.

Our trainer, Steve, was excellent. I wasn’t exactly sure what to expect – perhaps some lying on gym mats performing CPR? But no. It was all very professional and informative. Plus there were adult and baby dummies, so no embarrassing close encounters.

Steve took some time at the beginning to find out what we wanted from the course, which was enlightening. Most people said their main priority was to learn how to not panic. When it’s your own child, it’s your worst nightmare to have to give first aid. I’m not a panicker, but I am someone who will hesitate in case I do the wrong thing, so my main priority was to feel confident in my skills, so I don’t waste time second-guessing myself. Others were more specific – “how do you treat a burn?”,  “what do you do when your child is choking?” and “what if someone has a seizure in a swimming pool?”

From memory, here’s what I learned.

If they’re not breathing

In the case of a baby, we have to create a seal over the nose and mouth and breathe into them.

I think focusing on these key skills before our coffee break was a good way to do it. We practised on the dummies and talked about using your body weight instead of arm muscles for compressions – it can be quite tiring. We also received a handy wee mouth guard in a packet to stick in our wallets, in case we ever had to do this to a stranger.

I found it quite sobering practising these life saving skills on a little baby doll.

We chatted about it over carrot cake and brownies. Everyone has a story about a child’s head needing glued, or a burn or broken bone – we all just wanted to feel like we could handle whatever our kids threw at us. Other tricks we learned included:

I mean, this is for reference, I’d really recommend doing a course for yourself. We all agreed we felt more confident afterwards, especially as our children have more playdates now and more independence from their parents, so we need to feel confident looking after kids that aren’t our own. Steve’s mantra “Doing something is always better than doing nothing” has stuck with me. I just hope I don’t need to use most of my new skills any time soon.

Hey you know what we didn’t cover? What to do when your child slams a car door on their thumb.

Which the wee man did, precisely 24 hrs later, in a car showroom. I was distracted by his brother, who had locked himself inside another car.

Of course he was too upset for cold water or ice – so it was kisses, cuddles and McDonalds.

Some things you don’t need a course for. 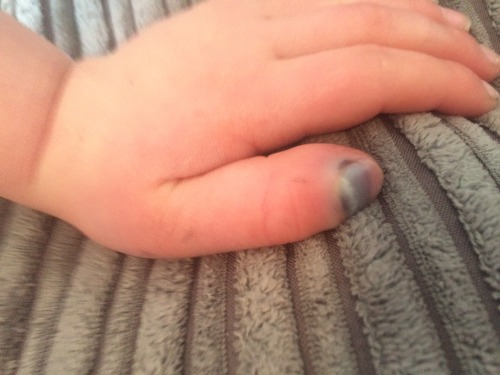