Do you scare easily?

How vivid is your imagination? 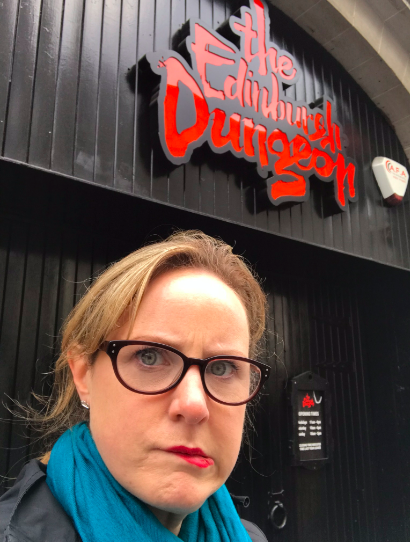 Just like the time I went to see Shutter Island, I deliberately avoided reviews of Edinburgh Dungeon. I’ve not visited any of the sister attractions (London, York, Amsterdam etc) and I didn’t tell anyone I was going. I wanted to be surprised.

On four separate occasions I screamed out loud. Three times I burst out laughing. The Australian couple next to me thought I was highly amusing – until the Torturer pulled one of them out the crowd to demonstrate the castration device. He took one look and switched to the hamster castrator (yep, that was my third guffaw of the day). 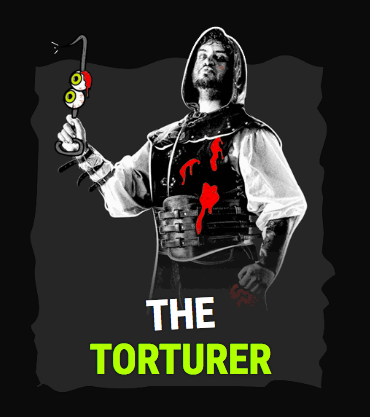 I think it was the darkness.

I had no idea what was coming next – ever. We were standing, we were sitting, we were on a boat, we were in the dock, we were in a graveyard, we were underground – there was no pattern and no predictability.

The line between what was real and what wasn’t shifted constantly. People kept coming alive or appearing an inch from your nose. Your seat moved, the ground spun, the disorientation was brilliantly orchestrated.

There was one point when I was genuinely scared.

It’s not easy for me to admit that, being the optimistic pragmatist.

I won’t spoil it for you, but it is genuinely terrifying not being able to trust your senses. I wish I’d had a hand to hold (sob).

The finale was a hanging.

I wish I’d kept that picture – my hair is flying, my mouth is wide open and I look like I’m about to vomit. Instead I opted to get the warrior princess picture – the one where I look like William Wallace is about to decapitate me. 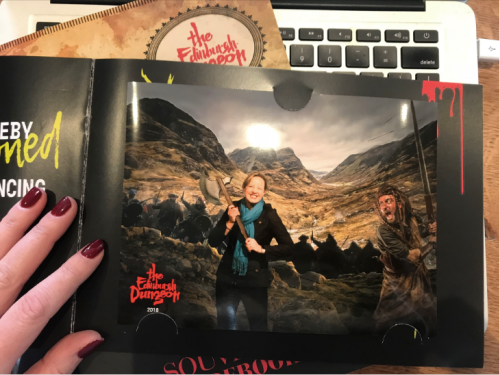 I’d say yes. It’s not cheap, but it’s 80 minutes of entertainment, including 11 shows and 2 rides.

Hell, yeah. And this is coming from a Disney aficionado. To a woman, they were utterly convincing. One played a madman to a terrifying level of realness, the Torturer had a killer sense of humour and a razor sharp improv skill, and the new William Wallace show was one of the actors who made me scream out loud. Give them all an Oscar.

Only if they’re in double digits. I spoke to the two 12 year olds on my tour and asked them if they’d been scared. They were lads so they were nonchalant but they admitted it was more frightening than they’d expected. My 7 year old would have had nightmares for weeks. The official advice is over 8s and under 5s aren’t allowed, so use your discretion.

If I were to have any criticism it would be that the historical element was underplayed. I learned loads more from the guidebook (which, incidentally, is a journalist’s delight – my compliments to the publisher). Yes, each show is inspired by real events, but I felt like some of that was lost in the theatre. I’d rather have had a scary experience than a history lesson, but a few tweaks to the script would make the difference here.

By its nature, the attraction is not particularly accessible – though there is a lift for visitors with mobility issues and, I’m told, a specialist wheelchair for evacuations. A couple of times they asked if people were sensitive to strobe lights, or had back problems or were pregnant. Those who had to stand out for these reasons were still actively involved in the experience, which I liked. The toilets were fine (there is a wheelchair-accessible toilet too) and the gift shop was quite cool, with a good range of products. There’s no cafe but they have a joint experience on offer with Hard Rock cafe which I would definitely buy if I had guests visiting Edinburgh. (from £32 per adult)

The one public service announcement which really comforted me throughout the experience was “don’t touch the people you meet – they won’t touch you (and most of them have the plague anyway)”. The knowledge that no one would grab me turned out to be quite important – like the spinning top in Inception, it was the anchor for me. That’s not to say that things won’t touch you …

My thanks to Emma at Merlin Entertainments for gifting me the ticket and the photograph.