I was just telling my mum, when she visited last week, that I thought we were getting over the Terrible Twos and making real progress…

I think a devil must have temporarily possessed the wee man , because he has never behaved so badly for such a sustained period as he did on Thursday 28 November. He pulled the curtain off the wall for God’s sake! All I had done was put him down for a nap, at the usual time, after a busy, energetic morning. He should have been tired. Instead, he cried angry tears for half an hour, so I went in thinking he’d maybe thrown his favourite toy out. Instead I was confronted with a tear-stained toddler, his trousers round his ankles and the curtain hanging by a thread.

I had really needed him to nap. We’d spent the morning at the beach and play park – a treat I had thought. But no, he had moaned and cried and ripped off his gloves and hat and refused to walk beside me. He hadn’t even wanted to pick up shells and throw them in the waves for long. In fact, he was only happy when I gave him crisps. 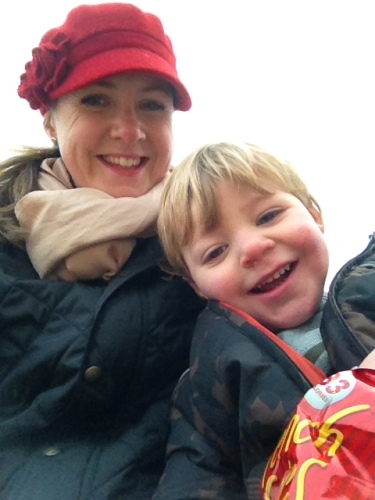 So after the non-nap I decided there was no point taking him to the park (he’d be cold) or soft play (he’d misbehave) and bundled him into the car to go to the shopping centre. At least there he’d be warm and strapped into a buggy. He sat beautifully, I got lots of Christmas shopping done and I thought we were over it.

I made him cottage pie for dinner and we sat at the table. He pushed it away. He wanted juice. He tried a mouthful. He spat it out. He wanted more juice. He threw a carrot on the floor. He screamed for juice. He threw his fork on the floor. I tried the aeroplane trick – he swiped the spoon and sent it flying. I refused to refill the juice. He screamed. I tried to cajole him. He pressed his mouth tight shut. I turned away to get the juice. He picked up the bowl and hurled it against the wall. It smashed. Cottage pie splattered. I lost it.

“THAT WAS VERY NAUGHTY” I yelled. He burst into noisy tears. I lifted him up and placed him very gently (so as to prove to myself I was still in control, when I didn’t feel like it) on the naughty spot and told him through clenched teeth why he was there. I then walked to the sink and stood taking deep breaths and counting to ten, while he screamed blue murder. For the next fifteen minutes I avoided all eye contact and just replaced him, time and again, on the naughty spot. I cleaned up the mess and loaded the dishwasher. I wiped down the counter and tidied. Eventually, in our own ways, we calmed down, he sat for the two minutes and I went over to him.

He leaped into my arms, squeezing me tight and wiping snot all over my shoulder. I hugged him back and kissed his head.

Then I put the cartoons on and opened a bottle of wine.

2 responses to “Testing, testing, count to 3”