What Would the Wee Man Do?

When I found out Edinburgh schools go back on the 10th of January, I was tempted to call the council.

What on earth was I going to do with them? When would I ever get back to work?

When in doubt – balloons

Rod probably wouldn’t admit it, but he must have been glad to get back to work on the 3rd. No one pulling anyone’s hair, repeating his name over and over and over or undoing everything he did… Actually, he works in the car trade, maybe that’s exactly what he went back to.

Thank God the nursery reopened on the 4th – only the Wee Man to entertain for three out of the six extra days.

Two days in and I’m kind of astonished to realise I’ve loved it.

What? So we’re at the park again – what’s your point?

If anyone is struggling to stick to their “Healthy January” resolution, may I suggest hanging out with my son? He makes every minute of the day count – and I love that about him. Some of my friends’ kids are content to watch movies, play with their Christmas presents and generally hang out at home. Not him.

Yesterday, after dropping KD at nursery, we went straight to soft play. We were the first ones there and he whooped with delight. One other family arrived, with two small kids, one of whom introduced herself to the Wee Man and off they went. She was adorable. I played football with them and cheered them coming down the slides. They got on so well that her mum and I swapped numbers and arranged a playdate.

After a couple of hours at home we were off again, to visit Auntie Kaka and play with all her daughter’s toys. Then it was the big one: his first swimming lesson. That half hour in the pool made me so proud I could burst. For once his general lack of fear played in his favour – he was leaping into the water, swimming valiantly as he sank lower and lower and laughing the whole time. I think his instructor fell in love with him a wee bit – I could see she was proud too.

Today we went back to the pool after the nursery drop off and practised. To say he was delighted was an understatement, I actually feel bad for keeping his arm bands on this long. There was an aqua aerobics class going on at the same time and he kept trying to join in, dancing even as he drowned a little bit. There’s a soft play at the gym so I managed a quick coffee as he played, but soon we were off again, home for lunch and a wee bit of telly before donning full waterproofs and heading to the park.

A dot in the distance

As he shot off across the field with his football in the sunshine I thought “He’s just a free spirit,” somewhat indulgently. With no KD to slow us down we must have covered the length and breadth of that huge field several times over. He only stopped to hang over the fence and chat to the woman poo-picking in the horses’ field. She’d heard the rumour JK Rowling owned the sprawling stables across the bypass too and we commiserated in our jealousy.

After an hour in the zero degree cold we headed back to the car and popped in to see his great pal and her brother who, in his mother’s words, is “mad on the Wee Man” (rather than mad with him)… His energy was undented. They tore around the house, laughing their heads off, as Allison and I drank tea and discussed whether boys or girls were more of a challenge to parent.

“You be Anna and I’ll be Elsa”

In the end the only thing that stopped us was a clamp on the wheel. Yes, they may be saving paper by doing away with tax discs, but they have opened up a whole new cash generator. I had just loaded KD into the car seat and was going back for the Wee Man when I realised the junk mail on the windscreen was in fact a £100 fine. 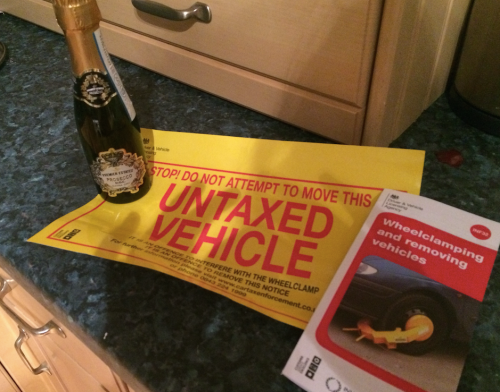 Drinking through the pain…

We have a joke in our family. Whenever we’re stressing about something we think of Big B, my so-laid-back-he’s-horizontal brother in law, and say “What Would Brian Do?” I’m thinking of adapting it to “What Would the Wee Man Do”? He is joy personified. It’s exhausting, but when it’s all about him, it’s incredibly uplifting. And fat burning.

So whenever you’re fed up, go ahead and borrow my new catchphrase. At least it will get you through January.