There's no escaping it

I have a confession to make – I thought if I just bought my clothes a size bigger, I’d be sorted. Same me, just a bit bigger round the middle.

When I admitted this to my friend Kirstin, who was asking why I kept fussing with my waistband, she burst out laughing. “Did you think you knew something no one else did?”

So I hold my hands up – the original plan was flawed. As I approach the five month mark even my leggings are getting a bit uncomfortable and my jeans, well, I’ve folded them on a high shelf and I’m trying not to look at them.

Yesterday I cautiously typed ‘maternity fashion’ into Google – and was very pleasantly surprised with what popped up. I was taken with Seraphine and their 20% discount made buying (gulp) maternity tights and maternity leggings a little less traumatic. It’s a strategic move – these basics will allow me to continue wearing my favourite sweater dresses without cutting off my own circulation in size 10 leggings or fussing with tights whose waistband will stay neither up nor down.

So I feel I’ve made a bit of a breakthrough. I’m beginning to accept that my body is changing and I need to make (short-term) allowances. But there’s a problem. I’m going on holiday in a week and I need to make a swimwear decision. Should I demurely cover up or brazenly sport the same bikinis as usual?

I think I’ll wait til my purchases arrive and I’ve actually worn my first maternity garment before tackling that one.

For a couple of days now I’ve been feeling uncomfortable – bloated, a bit crampy and like my skin’s stretched too tight.

Last night I could not settle. My stomach was upset and I couldn’t find a comfy position in bed. Eventually I sent poor Rod down to the kitchen to put the pack of oats in the microwave – you know the kind you get inside a cuddly toy that you can use as a hot water bottle?

I lay with the pink bunny pressed against my belly and thought “It’s OK wee baby, we’ll feel better soon” and then – pop!

This wasn’t the same type of gurgling that was troubling my stomach, it was right up against the warmth and felt like a big bubble had gently popped against the bunny.

“That’s just your stomach, I can hear it rumbling,” he muttered sleepily.

“No! It felt different – it was in a different place!” I started giggling and he propped himself up and smiled at me. “Really?” He put his hand on my belly but couldn’t feel anything.

“Cool babe.” He took my hand and drifted back off to sleep.

I smiled to myself. 19 weeks exactly. It’s going to be punctual, just like its mummy.

In training: Alone with our nephew

My poor sister-in-law’s about to pop with her third, so Rod and I offered to take her oldest out for the day. As Harris himself said, “Maybe Innes should have come too after all… But it’s my special day”

Harris can't decide if he's Spiderman or an Aardvark

Lesson 1: How to entertain a three year-old on an hour-long car trip.

We discovered roadworks have their uses – we counted tractors, diggers, lorries, explained the difference between tractors, diggers and lorries, then moved on to sheep and cows and trees and who saw what first.

Lesson 2: Not losing a three year-old at a family fair

Rod stood with bags, balloons, juices, prizes and jackets while I chased around making sure Harris had a shot of everything. He’s very well-behaved actually, with a surprisingly long concentration span for a wee one. He sat still as stone while his face was painted as Spiderman and usually stopped poking the other children with his balloon sword when we asked him.

We took him to the loo before we left, but fifteen minutes into the drive home, he piped up: “I need a pee pee”. We were miles from a service station. “OK Harris, we’ll pull over soon,” I told him. “Yes, onto a wee road with a parking space and I’ll go in the forest,” he answered. I wasn’t convinced but it sounded like he’d done this before. He then decided we could wait til we got home. We breathed a sigh of relief but when I tuned into his soft chattering to his toy five minutes later I realised he was saying “I still need a pee, I still need a wee pee” and thought it best to stop.

Lesson 4: Singing in the car

Solution: Make it up

We quickly exhausted the nursery rhymes and, knowing Spiderman was his favourite, Rod started changing the words to the old advertisement for Keypers: “Peter Parker, What’s inside your….” As he searched for a rhyme for Parker, Harris piped up: “Boot!” I got a fit of the giggles, which set him off too and Rod obliged. “What’s inside your boot?”

“Snakes!” Harris yelled, setting me off again. The rest of the journey flew by as we made up ridiculous songs and Harris screamed with laughter.

So the best part about hanging out with kids seems to be acting like a big kid yourself? I can totally do this!

Filed under other people's kids

18 weeks and the penny finally drops 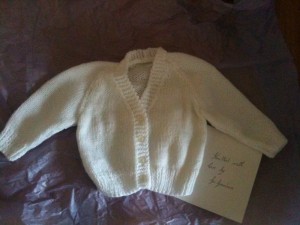 Knitted with love by Great Granma

My Granma dropped round with a present yesterday. Coincidentally it was the day I turned 18 weeks pregnant. Opening the bag and unrolling this teeny weeny cardigan stopped me in my tracks. Oh my god, I thought, as I started to cry, I’m actually going to have a baby.

Until now I’ve been happy about becoming a mum the way you’re happy about Christmas in the summertime. You know it’s coming but it’s way in the future and you have other things on your mind. First it was the nausea, headaches and tiredness of the first 14 weeks. Then there was the relief of finally telling everyone, showing off the scan pictures and enjoying everyone’s excitement. For the last four weeks I’ve been delighted to feel like myself again. I’m just back from a hen weekend in Puerto Banus with ten girls. It was wild in the way only a holiday with your best pals can be – and being sober didn’t make the slightest difference. If anything, I had the most fun AND I was always the last man standing! As you can see, I’m hardly showing yet, which made me feel less self-conscious.

MummyKimmy on the left at 17 weeks 2 days

I think the thing I’ve been most worried about, until now, has been losing myself. People are so judgemental about pregnant women and mothers – and even though I’m pretty much doing it by the book (married three years, own home, savings, close family, good job) I still feel the pressure. I don’t want to give up work or even really make compromises– it’s my own business and I’ve worked bloody hard to build it. I don’t want to miss out on the nights out or the parties – my friends are really important to me. I don’t want to lose the little quality time I have with my husband, who works 60 miles away.

But you know what? As I look at the hilarious photos from the weekend (sorry, I can’t possibly publish them) and as Rod lies with his ear on my belly claiming he can hear movement, I can relax. Sure, my life will change, but for the better, right? I’m surrounded by people eager to lend a hand, a husband who’s bursting with pride and excitement and I have full control of my working schedule… I’m a lucky bitch!

So I’ve decided to just go with it. I’m still me. Billions of women have coped with this situation – including my sister-in-law who’s about to pop with her third – and they’ve all managed.

I’m ready for the first kick now please wee one.