Mum bought me a self-help book for Christmas. We all got one. I think she worries I worry too much (wonder where I get that from?) I’m not normally into that kind of stuff but I don’t have a book on the go right now so I’ve put it on my bedside table and I dip in and out. It’s well written, the tone is light and it’s not patronising. In fact, it’s quite funny in places and it’s written by a Brit, so it’s not too schmaltzy.

Last night I got quite engrossed in the chapter about how we all live in a prison we build for ourselves – Cell Block A is self-doubt, Cell Block B is fear and so on. I was surprised to discover that one of the ‘cell blocks’ was seriousness. Hmmm. I didn’t know that was something to avoid. It’s definitely something I’m guilty of though. Apparently we’re being slowly squashed by the weight of public health messages and government advice; eat well, exercise, work hard, recycle, be a good neighbour, save money… The result is that we care too much about too many things.

You know when you read something that just strikes a chord? I put the book down and repeated this to myself. I am so stressed about bits of the show breaking down. Yesterday I had to ask mum to keep the wee man overnight so I could work right through til bedtime. There just aren’t enough hours in my day to run my business, keep on top of the housework and look after a toddler. I mean, how do single parents do it?! Thank God Rod’s back tonight and we have a day off tomorrow. I knew I wouldn’t be able to relax unless I had my two big projects completed and I knew my pride wouldn’t allow my husband to come back to a messy, dirty house.

Yes, I am my own jailer.

The book’s solution to this state of affairs? It’s very simple and very effective. It’s the title of the book. F**k it.

Isn’t that brilliant? I’ve said it out loud a few times today and it’s made me smile. I need to care less about things that don’t matter that much. So it’s taken me half a day instead of half a minute to reply to an email. F**k it. So my hair is a bit flat and there’s a photographer coming because I’ve agreed to contribute to a feature last minute. Dry shampoo. F**k it. So the wee man’s not eating his fruit and I have to give him another yogurt. F**k it. He’ll survive. So the move in date on our Aberdeen pad has been put back ten days. It’s a pain in my ass but f**k it, we’ll go up anyway and stay in the serviced apartments for a while.

It’s so liberating – try it! 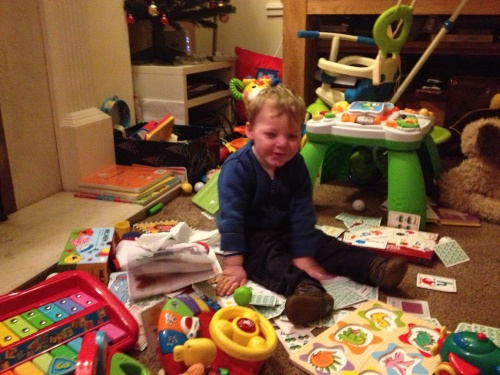 So he’s trying to drink beer… Actually, wait, is there really beer in there?